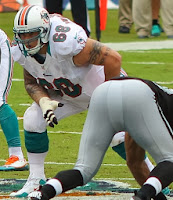 When I started in college, a group of students prepared a dummy class and none of the new students knew it was not real .

They played a political discussion that seemed likely to become a fight, but just before that happened, those who prepared the joke, laughed and said it was a way to welcome us. And it became a memory that we would always remember.

But it's different when people are abused or harassed.

When the jokes are permanent, they become a pattern of abusive behavior.

And it turns out that our Miami Dolphins, instead giving us news for their victories in the field, became news for this harassing behavior.

That the worst offensive line in the NFL, which has allowed the largest number of sacks in the league, that does not protect its quarterback at all, is now worse, because it lost two of its players and, incidentally, broke the unit of the team, if there was one.

And where was the coach in all this, one wonders. Who knows?

Now I understand why our offense is so disastrous .

And you can be sure that Incognito is not going to come back with the Dolphins. He was suspended too fast to create doubts about what he was accused of.

And Martin, I very much doubt he will return to that locker room where he may not be welcomed.

The point is that instead of cheering our sport , these gentlemen soured it .

How do I say now Go Dolphins?
Posted by Gustavo A. Méndez at 8:44 AM